Talent clearly runs in the family for Andy and Jamie Murray as they both reached the top of the charts in tennis in 2016. We wanted to honor and highlight their lustrous careers, and what better way than to do that with a catchy tune and one of our signature parodies? 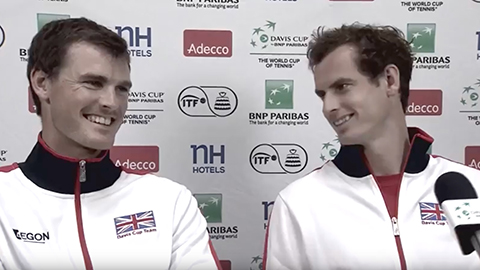 With the help of the Murray brothers, our latest music video tribute is sure to be a smash.  Pop sensation Ed Sheeran has found a fan in Andy Murray and he is the soundtrack to their success in this customized version of “Don’t”.

Combining exciting on court moments, touching celebrations, and contemporary dance, this fun music video will give fans a thrill before they see Andy and Jamie hit the court next. Get ready to pop, lock, and drop it, because this is one original parody you DON’T want to miss!

Don’t Mess With My Bro

Andy works his magic with an all court game
Breaking down opponents with his baseline play
Counterpunching those standing in his way
Double handed backhand down the line all day.

Djokovic, Tomic, Groth, Kokkinakis, Kerber, Murray & Soares Go Down Under
Previous ArticleWelcome Back Petra! Petra Kvitova Goes #HashtagPosing with Outside the Ball in Central Park
Next Article The Faces of Futbol with Fabio Fognini & Robin Haase