Jamie Murray and Bruno Soares are making a racket about a different sport. We’re talking about the sport of Padel, a mix of tennis and squash, which is played in an enclosed space. Before hitting the “court”, the tennis stars spoke to host Mayleen Ramey and described the differences and similarities you’ll find between the two sports. 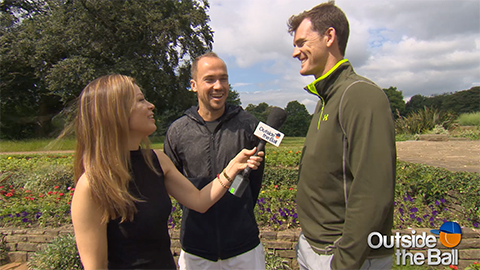 “It’s very different, cause compared to tennis it’s three dimensional.” Bruno Soares began. While scoring may be the same as tennis, in Padel, the ball is allowed to be played off of the surrounding walls.

“The hardest thing I find is letting the ball go past you so that it hits off the wall and then you hit it again or hit off the side wall. We’re not use to that at all.” Jamie Murray added.

While they’ve never teamed up for padel, both Jamie and Bruno agree that padel is a lot of fun! “I feel like people once they start playing they’ll really enjoy it”. A little nervous at first, Ramey joins the world champs for a hit in an English garden and is quickly hooked. If you haven’t experienced padel before, we encourage everyone to get up and give it a try. After you watch this video, of course!

Caroline Wozniacki and Angelique Kerber Give Us Tips to De-Stress Like a Pro
Previous ArticleTop 10s (Tennis) Photos of the Week: November 12, 2018
Next Article Alexander Zverev Shares The Lessons He’s Learned Through Tennis