On August 13th, 2016 Monica Puig made history by winning a gold medal at the Rio Olympics. Not only was she the first Puerto Rican woman to win a medal, she won the first ever gold medal in her country. Puig joined Outside the Ball host Mayleen Ramey to talk about her golden victory and her special four legged good luck charm! 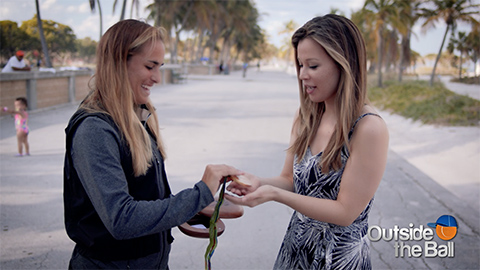 When asked how she felt about that historic Olympic medal ceremony today, the tennis star admits that the emotions are still there. “I still cry quite a bit. It was the most amazing moment of my life and my career. You know I just have to keep watching it to tell myself that it really happened!’

While the memories are stamped into Puig’s mind, she always has a reminder in her dog Rio. Monica’s puppy pal made a playful appearance in our video as she described how their friendship came to be. Before heading off to Rio, Monica knew she wanted a dog and her name was a natural. “For me qualifying for the Olympics is so special that I just wanted her to symbolize something very special in my life. Who would have ended up knowing she would have been my good luck charm all the way!” 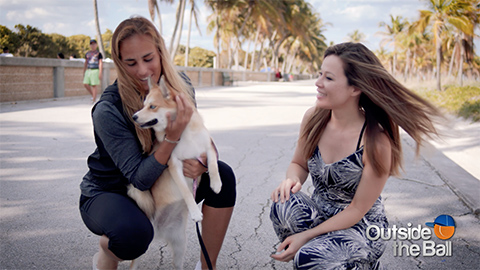 We couldn’t talk about Olympic history without admiring the gold medal itself. To end our interview, Monica showed off her bling to Ramey and our cameras. This video takes you behind the Rio ceremony and into the heart of an Olympic athlete and the friends she made along the way!

A Tribute to Ana Ivanovic: Best Moments and Laughs on Outside the Ball
Previous ArticleLiving Young with Evian Ambassador, Madison Keys
Next Article Karolina Pliskova and Marin Cilic Debut US Open Kits at FILA Photo Shoot