The start of summer can only mean one thing, the WTA pre-Wimbledon party! The ladies sizzled on the purple carpet at the Dubai Duty Free WTA Summer Party as they joined Outside the Ball host Mayleen Ramey to talk about their favorite signs of summer! 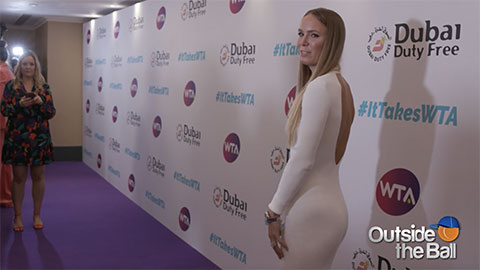 We asked the tennis stars to describe the perfect summer, and when it came to summer accessories, the women didn’t hesitate to share their must haves for the season. “Sunglasses and hats!” Donna Vekic replied. “I love hats! It doesn’t matter which ones!” Elina Svitolina added. Vekic and Naomi Osaka went on to describe the best scents of summer. For Donna it was all about the BBQ and for Naomi it was the fresh cut grass, which is ideal or Wimbledon! Some people prefer the weather to be nice and cool, while others love a good scorcher. Heather Watson and Katerina Siniakova were in agreement that 28 degrees Celsius (82 F) was summer perfection.

Now that we have our sunglasses on, where should we go for the ultimate summer vacation? “I would definitely stay in Europe because I think Europe is beautiful in summer so probably somewhere on the French coast or Italy,” Belinda Bencic described. “Croatia!” exclaimed Donna Vekic. 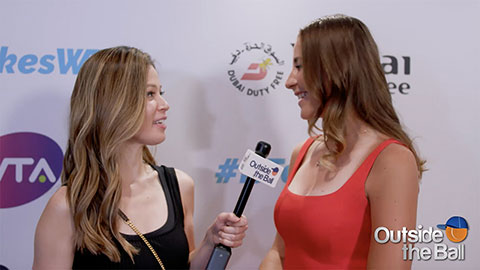 “I haven’t been on holiday in like five years but if I were to go on a summer holiday, one place I’ve never been that I want to go is Ibiza,” said Heather Watson. You may spend your summer laying on a beach with a good book, but for Garbine Muguruza, she takes her summer activities to new heights. It turns out, the Spanish star is a bit of a daredevil. “I would bungee jump. I would try it! They (my team) don’t want me to do something that dangerous but I’ve done some adrenaline stuff like fly in acrobatic airplanes, drive and stuff. I will do it in the future but not now!”

Traveling around Europe and bungee jumping may sound like fun, but the Wimbledon action has begun in London and that is our definition of a perfect summer! Stay tuned for more interviews from the Dubai Duty Free WTA Summer Party, coming soon to Outside the Ball!

It’s the Summer of Love! Support Your Favorite Tennis Charities

Giving Back with Outside the Ball’s Summer of Love