The age old question, is that so and so or do they just look like them?! This week, Outside the Ball host Mayleen Ramey joined Novak Djokovic and Robin Haase to discuss hilarious cases of mistaken identity. Just because you’re in the spotlight, doesn’t mean fans will always get it right. 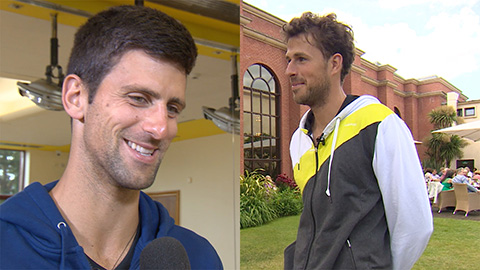 Novak Djokovic starts the video off by describing an intoxicated Serbian man who greeted the tennis star in a gas station, but unfortunately, mistook him for an old childhood friend. Novak wasn’t quick to make the correction. “I was trying to play a game with him but in the end we just hugged and made a photo.”

Robin Haase said he resembles a soccer star from Holland, but it’s his similar name to another ATP tennis pro that gives him the most misplaced recognition. “I have actually signed a few balls, not because I look like him but because of my name. My name is Robin Hasse and you’ve got another tennis player called Tommy Haas. They do sometimes call me Tommy and I have actually put my signature as Tommy.”

A little case of mistaken identity can happen to the best of us. Hopefully this playful interview will clear up any confusion.

Watch Novak Djokovic throw down a rap for Outside the Ball and see his new hair style
Previous ArticleBernard Tomic Shows Off His B-Ball Skills and a Fierce Pose
Next Article Welcome Back Petra! Petra Kvitova Goes #HashtagPosing with Outside the Ball in Central Park